“The First Brush of Spring” paint out in New Harmony Indiana this past week was a great artist retreat. I was able to paint, meet up with old friends and make many new acquaintances. Thank you to all that participated and made this a meaningful time away. 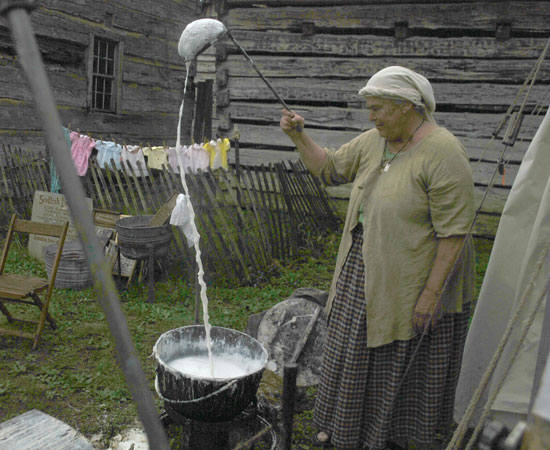 I enjoy taking one scene and exploring it from all angles as I have with the Plein Air “Barn Exploration”. All paintings completed with a painting knife which provides a beautiful rich textured paint application. Please look for me my upcoming workshops on my website.

Its always good to bring a friends when you plein air paint. But you don’t want someone who interrupts your artist-zone once you have begun painting. Marcel is a great painting buddy. Water, a leash to keep him safe and a few rubs on the tummy is all he needs. He did let me know when it was time to go and the painting was finished. 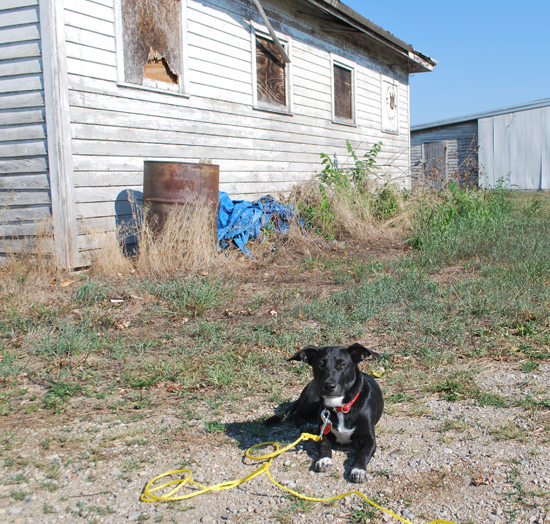 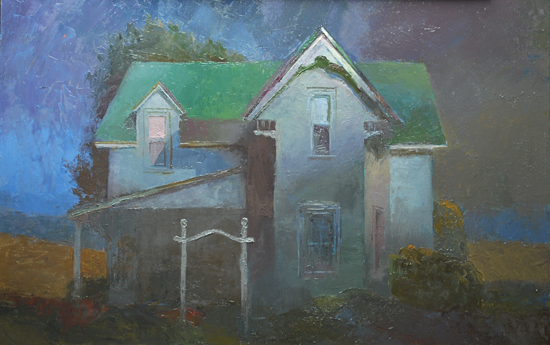 It takes so long to find your way as a painter. I have heard a lifetime. Though I have enjoyed many accomplishments, I feel that I have just now taken my first big step in understanding myself and what I want to paint and how I want to paint it.

I have heard that many judges of juried shows can tell if your work is sincere, and if it is not they will see through you and not select your work. I have no way of telling if this is true or not. But I hope from this time on that they see the sincerity on my work that only I can bring. It is me and no one else.

But what I can say is that one judge told me in a blanket statement in a show that I was part of was this: “ This is very much a Midwest show. It reflects a suburban idea of what art can be. There is no urban imagery and much that celebrates a nostalgic vision of an old-fashioned, rural America.” Thanks Owen Findsen. You are right. And though those words cut me and hurt so much, they where correct. Even the little portion that I was able to digest at that time, and more as time went on.

It was the very words I needed to here to help me discover what I was truly always inspired about as an American painter. It was just that, rural America. Like the great painters, though not all rural, I have always enjoyed, Grant Woods, Andrew Wyeth, Hopper and George Wesley Bellows that captured a glimpse of what America was like in these isolated areas of America. This was something that always inspired me since I came from a very rural area, mostly farming was all around me, and my fathers father was a farmer. We where brought up with what I believed where heartland morals that came out of the second World War when people believed strongly in America, the American people and the American way of life under God.

This is what I really wanted to paint as an American Oil Painter. Bringing our attention to good, handwork and physical life. A biscuit you could be smelled baking in the oven, made from scratch using ingredients available close at a farmers market or even better from your own farm. People who had and could show on their faces life, real life, that they themselves had lived.

Like the documentary photographers of the old Time Life magazines that showed us an unseen life some place in America and bringing it back to our attention.

What I was painting before was more of what I thought art should be as being more duplicates from what other painters had shown as their art. What I want to bring now is my perspective. My concerns. My life of who I am, how I was raised and all that inspires me about the gift of life we all share.

This door so impressed me on the old farmhouse in Russelville Ohio. I was not sure I would be able to capture all of the rustic nature of the old wood and weathered paint that was self-destructing and lifting itself from the wood it was attached to.

I enjoyed some of the rough drawing as it juxtaposed the rough pallet knife painting of the door. The colors seemed to force the visual 3d space.

I was out shooting reference for this painting and I saw this beautiful hill and the sweeping grass, I knew it would be perfect for the model to walk up the hill for a photo. After several tries I believe I captured something I would like to paint. But when I got into the reference so much was lost from what originally inspired me about the image. It was up to me to bring back from memory my vision, image feelings and impression of that day.

As I painted colors began to emerge, the softness of the moving tree leaves with the color resonating as light touched the moving leaves. The softness of the fence post, so dangerously placed in the center of the painting added a balance of focus for the model and space they shared. The movement and sway of the models hips and associated dress as she took steep steps up the hill, working against the pattern and movement of the tall grass and the unusual colors they captured as I was looking into the light.

Being at my Grandfathers farm was such an adventure when I was a child. My cousin Terry and I would explore everything we could find. Bursting out to take a long walk on those little legs of ours, covering as much of the fields as we could. It seemed like my Grandfathers land went on forever. I could not see it all yet walk it all.

Looking in the old barn, outhouse or chicken coop, we were the best type of explorers. Finding old creamer pales from a time long past. An old watch-a-ma-call-it that has a handle and grinder with all kinds of gears stay close to my fireplace in my present home as does the creamer pale I found in those days. It was a safe place and a good place.

Your mind could just imagine all of the good things happening their. 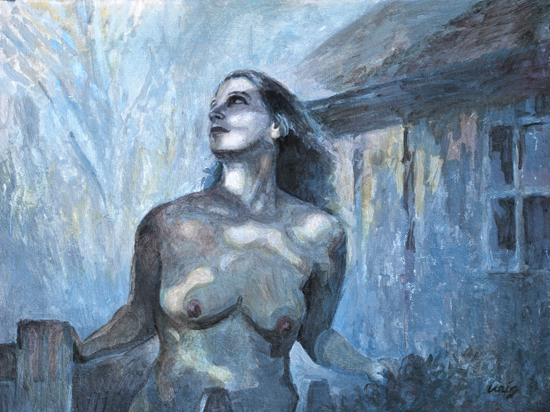 I enjoyed the strongly beveled shapes that dramatized form. Softening and generalizing values to emphasize space I then concentrated on the head or face. To many paintings I have ruined by not giving proper attention to all the small detailed shapes and anatomy of the head.

In addition to this I had the sharp shadowing from the trees casting shadows across the models face and figure. It became apparent to me that it was moonlight and I had to pay special attention to what was happening in the forms of the background tree lighting and the cast shadows of the barn next to her.

I realized I needed to bring something in to the foreground by her hand and fence so I took a photo of the image back into PhotoShop to experiment with different images and colors that would work best there. I found a few different flower images I liked, made a black and white print out and went back to painting. With some of the subtle greens in the foliage I was adding I also added some warmer tones in the flowers. Then being careful to subtly add blues glazes, soft yellows into the painting to further dramatize space with the use of warm and cool colors.

I wanted it to look like what things look like when I am outside in the moonlit evening. This you cannot capture in a camera, you have to create it. Things seem so hard for my eye to see and define in the dark. Greys abound and the light seems to dance everywhere and you can feel subtle tints of color. It is almost like your eye sees in some kind of TV static fuzziness.

I was not sure how to handle the model coloration, so another photo and back to PhotoShop to play with what color and how much of it and where it was needed to warm up the models flesh, bring her forward in space and not leave her in anemic, deathly blue tone.

Satisfied with my exploration in Photoshop I wet back to painting to capture my vision in paint.

Workshop: How to use the Digital Image in paining, See workshop page of website

Sometimes you just don’t know what inspires you about a location, ingredients of a landscape painting, or time of season. For some reason this image really captured me. I really enjoyed painting this old farmhouse nestled back in the graying trees of the landscape in contrast to the tree in the foreground cut down for wood for the expected cold winter ahead.

The grayish colors and glows of just simplified color masses of the background trees to the detailed, higher contrast, more rich colored foreground tree stump added a great special distance in this painting. Allowing some of the surrounding color from behind the house to move into the house added greater unity to this distant spatial plane. I enjoy the subtle color shifts in the grayish tones. It gives the painting a smoky feeling.

Subscribe to Urig’s Blog: “The Adventure of an American Oil Painter” Blog by Email

American Oil Painter Daryl Urig is a member of The Portrait Society of America, Oil Painters of America and Cincinnati Art Club. He has teaches at the University of Cincinnati for over 9 years and is president of Total Media Source Inc.

This was a scene I had to paint. In the barn, there was a bucket hanging from a twisted old nail, accentuated by various shadows and lights hitting the worn floor boards.

The light that hit the bucket provided a nice transition to the glaring light that came through the boards from outside. The high key tones in the light complimented the deep, obscure tones in the enclosed barn.

Old structures are sometimes hard to paint. I think I was able to complete this painting by focusing on textures of the wood and the dark patterns of the slats of barn siding and juxtaposing them against the bright outside light.

Subscribe to Urig’s Blog: “The Adventure of an American Oil Painter” Blog by Email

American Oil Painter Daryl Urig is a member of The Portrait Society of America, Oil Painters of America and Cincinnati Art Club. He has teaches at the University of Cincinnati for over 9 years and is president of Total Media Source Inc.